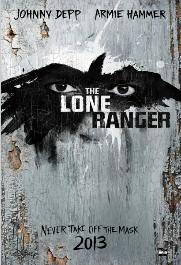 Earlier this past week,Walt Disney Pictures released the very first movie trailer (below) for their upcoming “Lone Ranger” action/adventure flick,and it looks really great as it features a ton of high-paced action scenes with bigtime movie star Johnny Depp as the Indian sidekick Tonto. At one point,he’s literally riding under a damn, moving train. It’s great. Check it out,below.

It will take the audience on a runaway train of epic surprises and humorous friction as the two unlikely heroes must learn to work together and battle against greed and corruption. It’s scheduled to arrive in theaters on July 3rd,2013. Stay tuned. Follow us on Facebook by Clicking Here. Follow us on Twitter by Clicking Here.