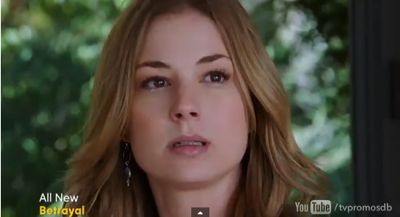 Recently, ABC released this new promo/spoiler clip (below) for their upcoming “Revenge” episode 14 of season 3, and it seems to be extremely intriguing and very,very intense as Emily gets driven overboard, and is just ready to kill everybody, and more! The episode is labeled, “Payback.”

In the new clip, Victoria is spotted, questioning Emily ,hardcore, about her real parents and where in the F did she actually come from. Meanwhile, Emily just stares at Victoria with a look of utter disgust. Next, Emily says, she’s losing control and appears to be extremely distraught. They reveal that new threats will show up for action. Then Victoria is spotted, threatening to fight some other lady with her last breathe.

They revealed that new alliances will be forming. Daniel thinks Emily is now working with Conrad. And there’s also a new “Revengenda” where Emily ends up, telling Nolan, she’s just ready to ,straight up, kill everybody! Uh oh! Check it out,below. Episode 14 is due to hit the airwaves on Sunday night, March 9th at 8pm central time on ABC.