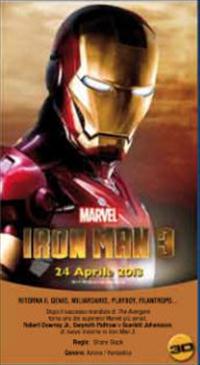 Recently, Marvel Studios and Disney Pictures, dropped the 2nd,new,teaser movie poster for their upcoming super hero/action flick, “Iron Man 3,” and it looks pretty cool as it features Iron Man in all his flashing lights glory. It’s not the best quality,though, but it’ll do at this early stage of development.

The new film, kicked off production earlier this month with major stars: Robert Downey Jr., Gwyneth Paltrow, Don Cheadle,and Jon Favreau, spotted on set,and ready to do work. There was also an appearance of an A.I.M. building, which may spell major trouble for character Tony Stark.

Also, rumors of the Iron Patriot’s appearance in the flick, were recently shot down. However, we will see a red,white,and blue iron suit, but it’ll be sported by Tony’s “partner in crime” James Rhodes (Don Cheadle).