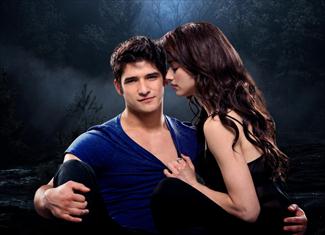 MTV is getting ready to debut the highly anticipated 2nd season of its hit show “Teen Wolf.” In light of that,they revealed the first premiere photo (above),and it looks pretty steamy as character Allison is all over Scott. The two actors are,of course,Tyler Posey and the beautiful Crystal Reed.

In the 2nd season,we can expect to see Scott become a new bad boy. Allison will get more adept at hunting,which could be a good or bad thing for Scott. Poor Lydia’s fate is still being kept top secret. However,I think she should become a werewolf if she lives, since she got bit by the Alpha.

Speaking of Alpha’s,the new one,Derek, is going to be recruiting new wolves,so he can eventually rock the full wolf form like his dead uncle did. Meanwhile,Stiles will be giving his dad some new troubles. New characters will also be introduced. It’s going to be a very lively,action-filled,larger season with a whopping 24 episodes,instead of just 12. Stay tuned. Season 2 debuts on June 3rd,2012.